The messy details of each life history then unfolded according to the syntax and grammar of the disease-and-recovery discourse learned in the kind of therapeutic setting where we met. 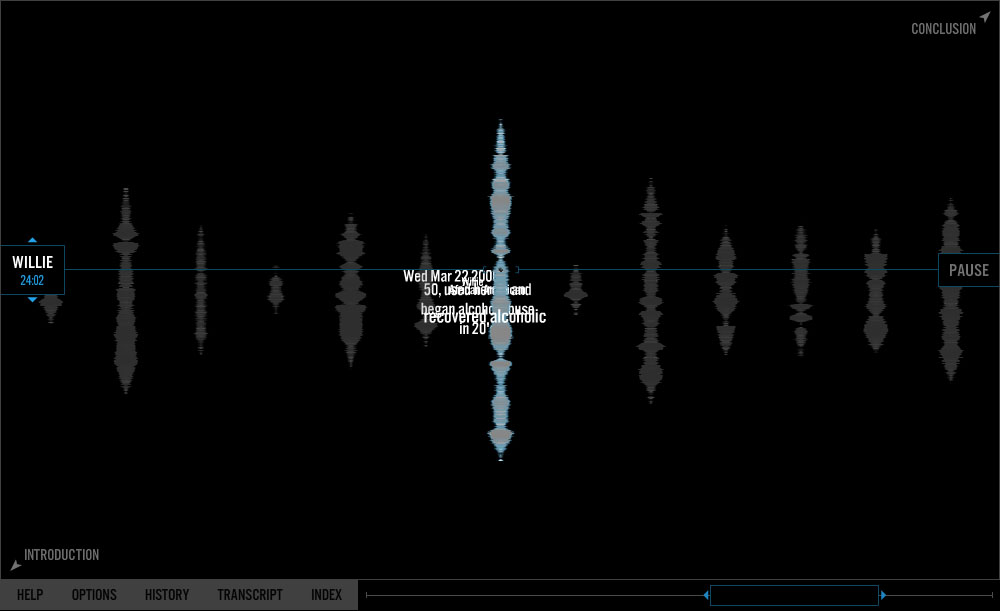 Designer's Statement
Conceived of as a companion piece to our earlier collaboration Public Secrets, Blood Sugar provided Sharon Daniel and I a unique opportunity to revisit the approaches of the earlier work in light of material quite different in both its form and content. Sharon and I agreed early on that the basic aesthetic direction established in Public Secrets should remain intact. After spending some time with the recordings to be featured in Blood Sugar, however, it quickly became clear that a different approach to navigating the audio would be required. Where the statements of Public Secrets' interviewees could readily be segmented into concise utterances on particular topics, the current and former injection drug users heard in Blood Sugar demanded longer periods of sustained attention, the various stories they tell dissolving into each other in ways which resisted atomization.

This continuous quality resonated with the biological element which plays such an important role in the project. Sharon's focus on the chemical proclivities of the human mind and body lent itself to the introduction of visual metaphors normally associated with medicine: each interview would become a waveform-like "body" annotated with statements, questions, explanations, and even numerical "data" measuring a given interviewee's oscillations between topics located primarily outside of the skin (social) or inside the skin (biological). The amplitude of these visual waveforms are determined not by the volume of the audio for each interview, but instead by the density of Sharon's annotations at any given time. These annotations were input into the project database using a custom tool that allowed for each piece of content to be tied to a specific point of a given interview, and for the timing of whole interview to be associated with its transcript, so users wishing to switch between listening and reading can do so without losing their place.

The design process for Blood Sugar was a particularly arduous one, and a reminder of both the dangers of technological determinism and the value of face-to-face collaboration. Nintendo's Wii console was still experiencing its meteoric rise in popularity at the time we started working on this project, and I immediately set my sights on making the piece one that could be controlled both with mouse and keyboard and with the Wii remote. Sharon agreed this would be an interesting avenue to pursue, and very quickly we hit upon the idea that the remote could serve as a tactile surrogate for each audio "body" in the piece. Tilting the remote into different orientations would likewise rotate the currently active body/waveform, revealing different sets of annotations depending on whether the remote was pointing straight up and down, sideways, or forwards.

We both became so enamored of this idea that for many months it remained an unquestioned assumption in our design process—until fifteen or so rounds of iteration made it clear that as an interface conceit it simply didn't add anything to the experience. Not long after this crisis we hit upon the much simpler visual metaphor of "getting closer," a simple zoom through various stations of depth at which specific questions and content could be staged. Suddenly our visual metaphor was working with the content instead of against it, and everything quickly fell into place. As our work process for Public Secrets involved several all-day face-to-face meetings which proved extraordinarily productive in solving some of that project's thorniest design problems, we wondered how much time could have been saved if we had arranged for a few similar get-togethers during the production of Blood Sugar, as all meetings for that project took place via videoconference or phone.

In the end, however, the logjam was broken, more conventional Wii remote support was added for an installation version of the project, lessons were gratefully learned, and the collaboration was no less rewarding.