The goal of the project is to exhibit existing ideas, arguments and scholarly content present in the dissertation that cannot be fully expressed or demonstrated in a solely written format. 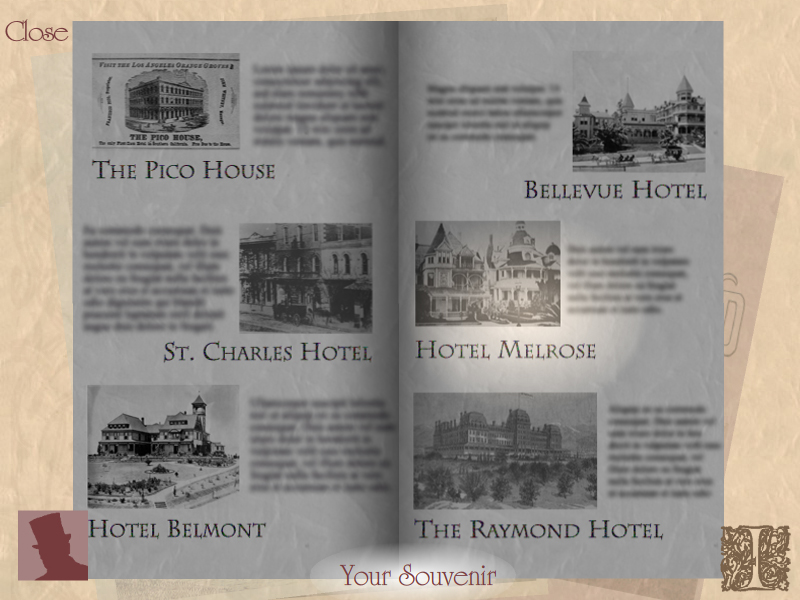 Megan Kendrick   megan.kendrick@usc.edu
AuthorMegan Kendrick is a Ph.D. candidate in the Department of History at the University of Southern California. Her current research interests include urban history, history of the built environment, visual culture and history of hotels and tourism. Her dissertation, "Stay in LA: Hotels and the Representation of Urban Public Space in Los Angeles, 1880s to 1850s" is a study of the role hotels have played in the creation of an urban identity for Los Angeles. Kendrick was the administrative coordinator for the "Urban Icons Conference held at USC in March, 2004. She was also the associate editor and graphic designer for the special multimedia "Urban Icons" issue of Urban History 33:1 (May 2006).

I am first indebted to the USC Annenberg School for Communications and their support through the Provost's Doctoral Digital Dissertation Fellowship. The guidance and creative energy I received in the early stages of this project through collaboration with the other fellows and the associated faculty was invaluable to my planning process. The opportunity to participate in the productive dialogue of the Vectors Workshop under the direction of Tara McPherson and Steve Anderson provided the critical foundation for conceptualizing my project in ways that challenge traditional norms of writing history.

I want to thank my programmer, David Lopez, who graciously and patiently worked with me on Virtual Tourisms in its various stages and forms. David's collaboration on this project added to its depth, and he consistently amazed me by his ability to turn my ideas into functional digital spaces.

I also want to thank Phil Ethington, who contributed valuable feedback to me throughout the development of the project, and Vanessa Schwartz, who along with Phil opened up doors for me in terms of pursuing new media authoring in the first place. Thank you to Kelly Schrum, Jose Maria Cardesin and Todd Presner, who offered many insightful and constructive comments during a panel at the American Historical Association Conference.

I am also grateful to the various libraries whose rich collections made the source material for this project possible. These include the California Tourism Collection at California State University, Northridge, the Huntington Library, the Los Angeles Public Library, the Regional History Center's Digital Archives at USC, and the Tom and Corinne Tomlinson Personal Collection.